Jeff Bezos is the richest man in the world. And his company, Amazon, is making a massive dent in the U.S. GDP.

If it seems like Amazon is everywhere these days, it’s because the company is doing way more than it used to, and continues to grow.

Yes, they sell millions of products, but they do so much more.

They have a variety of branded products, including the Amazon Kindle, Amazon Fire, and Amazon Echo. They’ve also invested many resources into their private label products in many niches, such as AmazonBasics, Presto, and Rivet. Across the board, their brands cover everything from automotive and sports and outdoors, to food and beverage, household essentials, health and wellness, and more.

If you can think of it, chances are, Amazon’s involved in it somehow. Amazon’s growth is a clear indication of just how rapidly ecommerce itself is growing, but selling on Amazon may not be the best option.

Why? Not only is there increasing competition between third-party sellers, but Amazon itself might also be cheating. 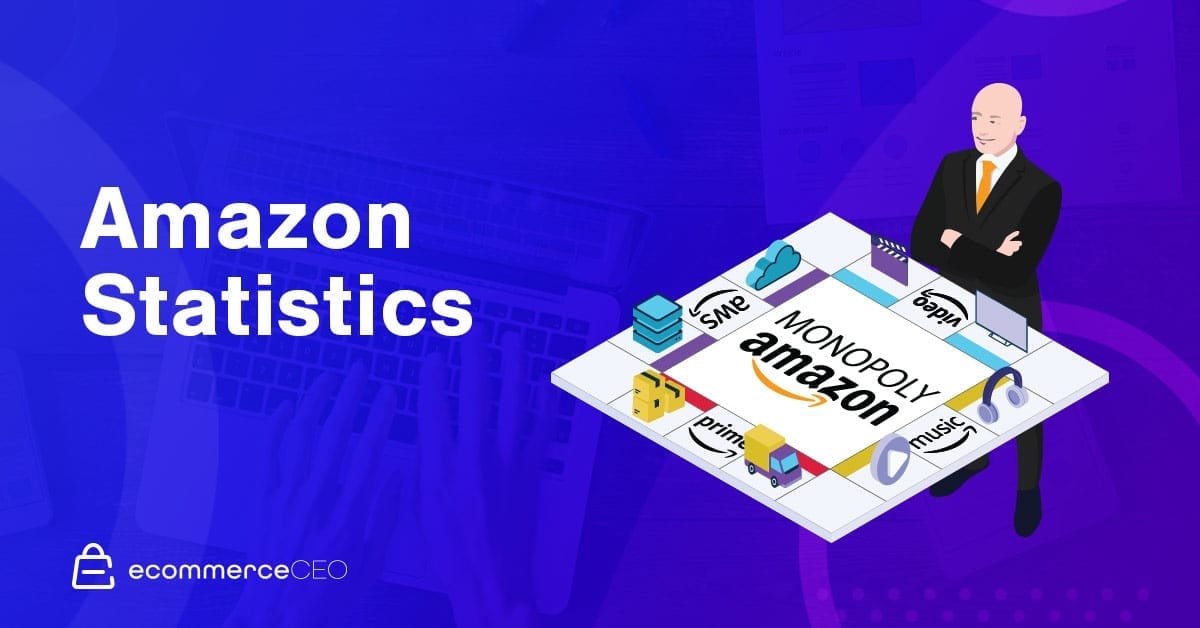 Let’s dive into the statistics so you can see how their dominance crushes the competition.

It’s not fair to compare Amazon’s annual sales to the competition. For a meaningful comparison – you have to look at a single day sales initiative (Amazon Prime Day) vs. the annual sales of publicly traded retail corporations. Amazon generated more revenue on Prime Day than Belk or Dillard’s in their entire fiscal year.  (Forbes, Dillards)

Yeah – we’re talking about a single day vs. all the sales in a single year. That’s how disproportionate ecommerce has become. When you add up all the retail sales from the 9 brands above, it is less than 1/2 of Amazon’s annual revenue, which takes me to the next killer stat.

Amazon’s Revenue Climbed Over 1000% In the Past Decade

By making substantial investments in launching a new line of Echo devices, expanding Amazon Fresh to additional cities, and expanding on Prime Wardrobe, Amazon’s revenue continues to grow. It’s showing no signs of slowing down. This rapid growth and initiative to drive prices lower is turning traditional retail on its head. 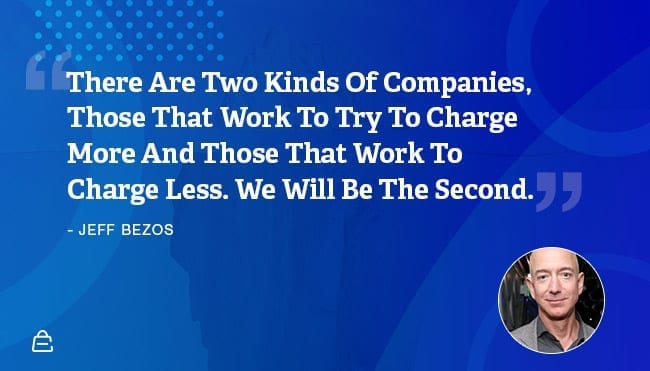 Amazon maintains that they’re not knocking out the competition – claiming they account for less than 4% of retail and pointing to Walmart being much more significant. But, politicians are calling for increased regulation on Amazon.

Amazon is using its monopoly in online sales to force companies to raise prices at its competitors like Walmart. That’s bad for families and another reason we need to #BreakUpBigTech. https://t.co/yblxJ2UA7V Amazon is a highly fragmented marketplace where millions of sellers make little to nothing.  When you think of all the products being sold and billions of dollars being made on Amazon – it’s crazy to think that less than 1% of the 3 million sellers make more than $1M per year. 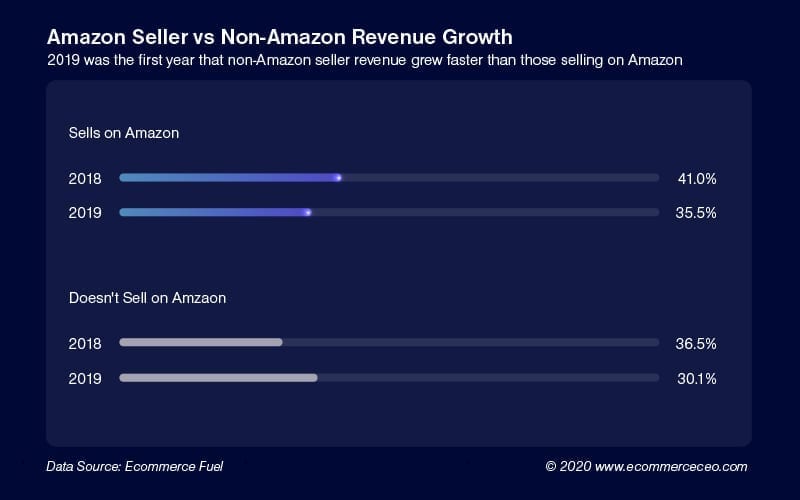 Despite the Amazon seller market being highly fragmented, Jeff Bezos still sees it as a threat. 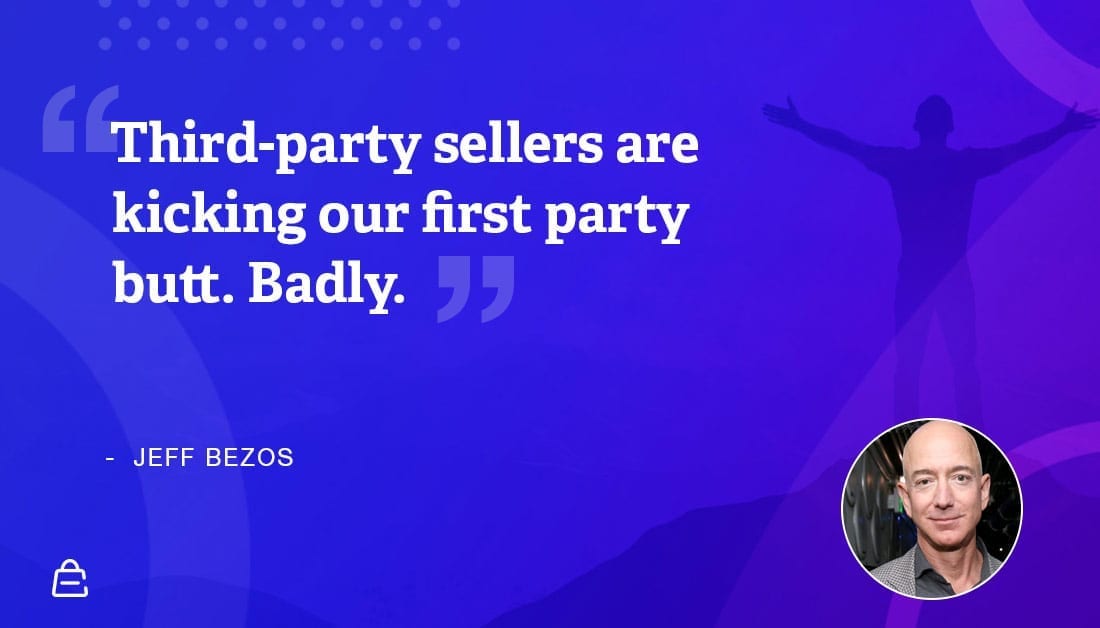 In fact, after this letter, Amazon launched an additional 100+ private label brands as a counter. 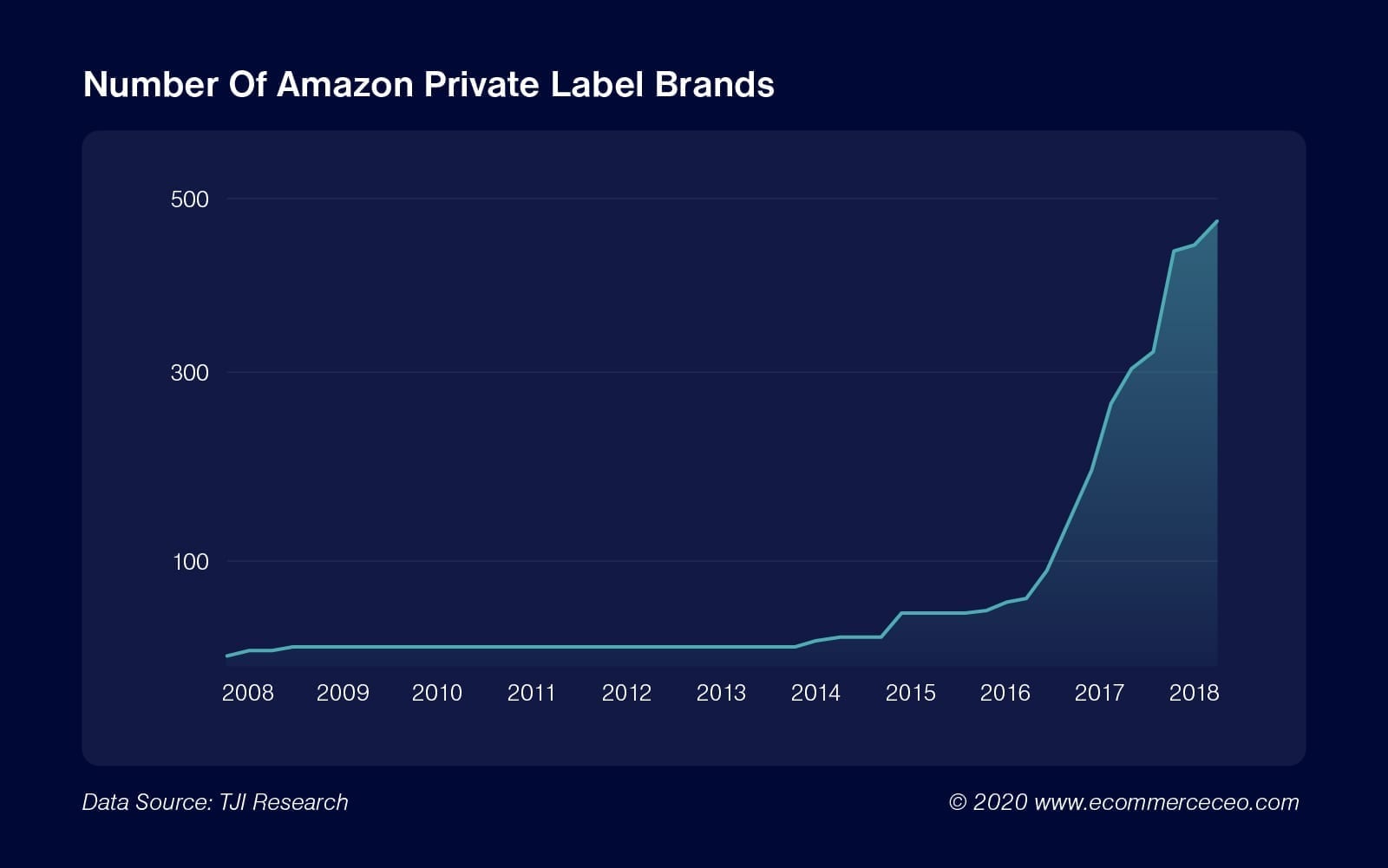 So what happens when Amazon launches their own brand in a popular product niche?

The WSJ suggests Amazon will promote their products over competing brands.

Amazon owns 146 private label brands and 234 exclusive brands in the U.S. alone. When deciding on what to sell on Amazon, it’s essential to look at the private label brand offerings Amazon offers that would compete with your product. The private labels are often priced lower, a significant selling point for consumers. Use an Amazon Keyword Tool to take a look at what people are searching for, and then do a bit of digging to see what’s already there, before you start to offer your own products.

Despite this, the existence of their private label brands creates competition for the smaller sellers. Rain Design, for instance, has been selling an aluminum laptop stand on Amazon for more than ten years. A best-seller in its category, the $43 product had 2,460 reviews and a five-star rating. In July 2019, a similar product, from AmazonBasics, appeared at about half the price (Bloomberg). As a result, sales of the original declined, and there’s nothing the company can do because Amazon didn’t violate the patent. Though the laptop stand seems to be outselling the copy now, Amazon launched a different product priced at 19.99 that surpasses them both.

Williams-Sonoma sued Amazon last year because the Rivet line that sells furniture and housewares sells “knock-offs” of their West Elm brand products. The Rivet brand includes many products that are “strikingly similar,” and as a result of the suit, Amazon has stopped selling some of its Rivet products.

Amazon is the 14th Most Popular Website in the World

As of January 2020, Amazon is the 14th most popular website in the world, behind Google, YouTube, Facebook, Gmail, Yahoo, and Wikipedia. It is the most popular ecommerce website online. (Alexa). In terms of ecommerce, most people start their search for products on Amazon (Jumpshot). 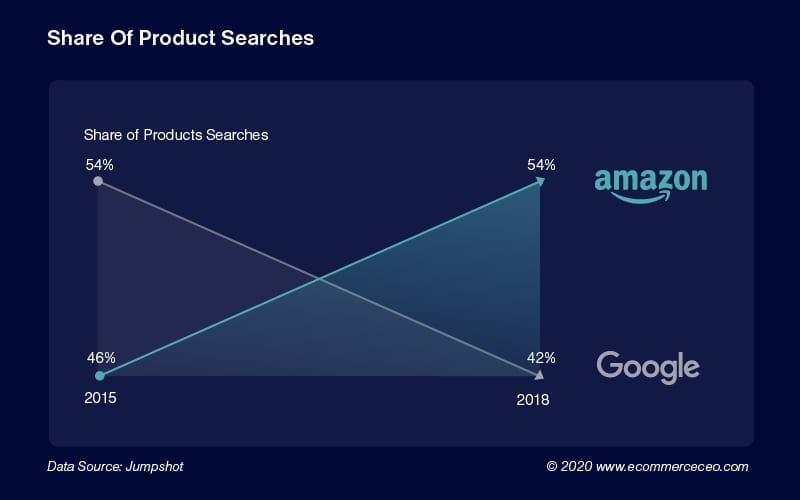 First hosted in July 2015 as a way to celebrate the company’s 20th anniversary, Prime Day was advertised as featured deals only for Prime members. Though the first year it was likened to a “crappy yard sale,” the company stepped up their game in 2016 and beyond. Amazon Prime Day is even bigger than Black Friday and Cyber Monday, and 2019’s day was the largest shopping event in Amazon history, according to CNBC.

In the early days, Amazon was just an online bookstore. Founded July 5, 1994, it officially opened for business on July 16, 1995. Within a month, the retailer had shipped books to all 50 states in the U.S. and 45 countries. Amazon’s rise led to the fall of brick and mortar bookstores like Barnes & Noble.

In 2009, Amazon launched its private-label brand, AmazonBasics. In a matter of a few years, they’d grabbed nearly ⅓ of the online market for batteries, selling more than both Energizer and Duracell on their site. (Marketplace Pulse). 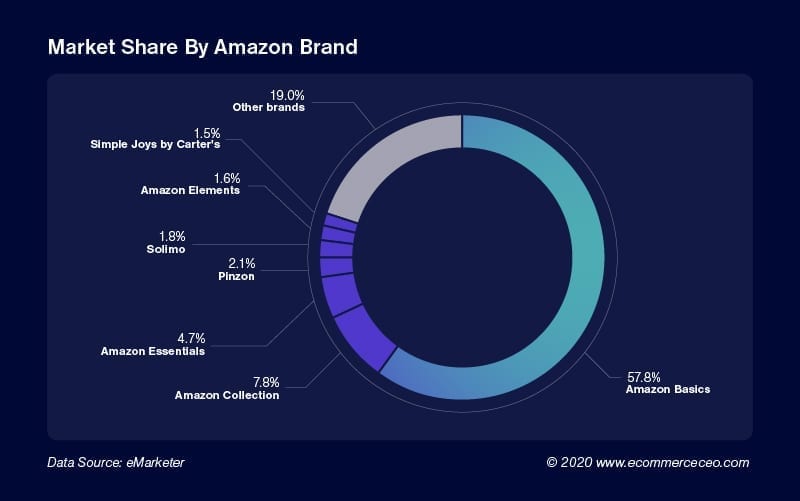 In the United States, there are approximately 128 million households, 68 million of those (53%) have Amazon Prime accounts.

A paid subscription service by Amazon that gives online shoppers access to otherwise unavailable services, or cost extra, for typical customers. Benefits include free one-day (on some items) or two-day delivery (on many more items), streaming music and video, access to Prime Pantry, and more. 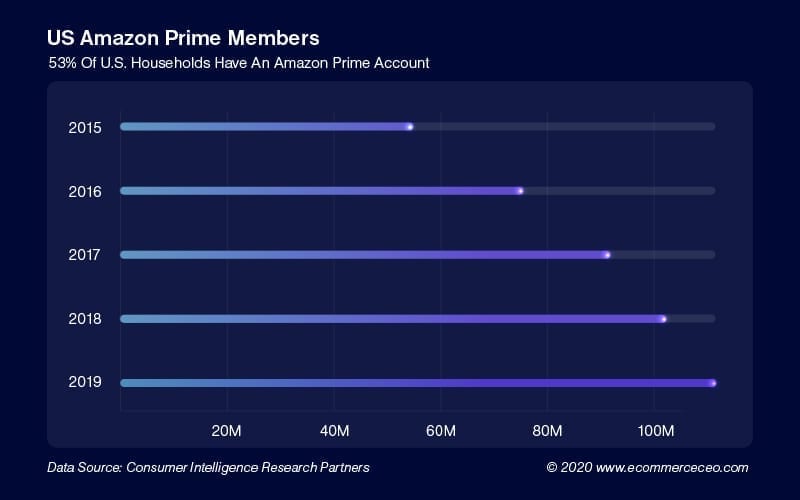 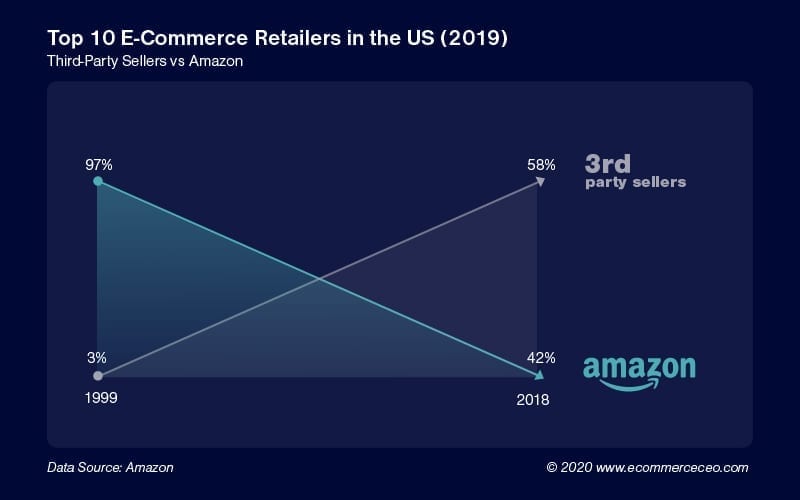 Amazon has physical store locations, in addition to Whole Foods Markets all over the country. These include Amazon Books, Amazon 4-Star, Amazon Go, and Amazon Popup. Amazon Books and 4-Star locations sell books, merchandise, and devices. Amazon Go is a grocery store type establishment without lines or checkouts. Amazon PopUps are a themed selection of top brands that are frequently updated. Locations are limited to larger cities.

To rely less on other companies to deliver their products, Amazon is now handling its shipping for 26% of online orders, according to research firm Wolfe Research. (CNBC)

Is Amazon A Monopoly?

The Amazon Effect, or the ongoing disturbance in retail as a result of Amazon’s existence, is real. Are they a monopoly? The courts will have to decide that.

Apparently Jeff Bezos enjoys being a political lightning rod. He purchased the Washington Post, and the amount of taxes his company pays always attracts scrutiny.

If I could steer more of my money away from wasteful government spending and put $10 billion into climate change, I would, too.

When it comes to Amazon’s complete domination of sales, logistics, warehousing, and manufacturing for multiple product segments. I say: 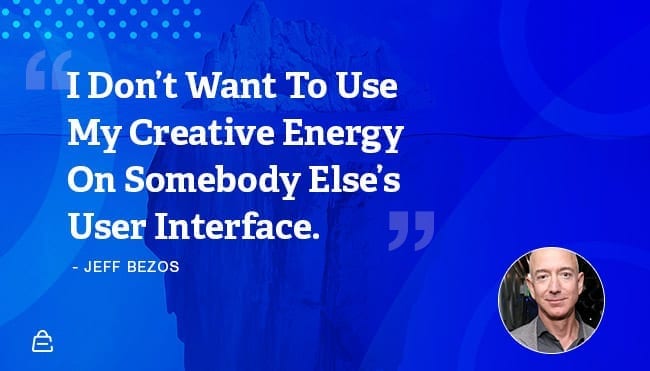 There’s still good news for small businesses, though. Amazon may be impacting smaller sellers, but it’s just changing how people buy and sell products online. With the right product-market fit and ecommerce platform, you can still rock your way to ecommerce success. Just make sure you carve out an online business model outside of Amazon. You can even join the giving economy and donate to causes important to you and your customers with an app like ShoppingGives.

Selling on Amazon is a great avenue to learn the ropes and test products, but don’t expect to grow past 6 figures, though.  You need to attract and convert your own traffic to build a brand that lasts.

Darren has an MBA in Internet Marketing and 10+ years of experience marketing retail, manufacturing and Internet marketing corporations, 7-figure brands and startups online. Follow him on Twitter, LinkedIn. Or take his course to learn ecommerce.